Up to this date we have received 278 abstracts from 51 countries.

Zadar has the most beautiful sunset in the world, more beautiful than the one in Key West, in Florida, applauded at every evening. Alfred Hitchcock, 1964.

Zadar is an ancient city founded at the centre of the Croatian part of the eastern coast of the Adriatic. Due to its favorable geographical position, it is characterized by mild climate with warm and dry summers and mild and rainy winters – the average temperature in summer and winter being 250C and 70C, respectively.

Zadar boasts a long and dynamic history that goes three thousand years back in time. It was often demolished, robbed, and devastated, but it always succeeded to rise from the ashes only to become more beautiful and richer.

In 59 B.C. Zadar fell under the rule of the Romans and the town assumed the features of a typical Roman city. A proper street network with the main square (forum), typical for Roman cities, has been preserved to this day.

In the early 9th century the city was the residence of Bishop Donatus. St. Donatus Church, today the most renowned church in Zadar, was built in that period.

In 1202 Crusaders and Venetians burned and conquered Zadar. After the Venetian rule and until the end of World War II, when Zadar was finally annexed to Croatia, it had been under the authority of Austria, France and Italy. 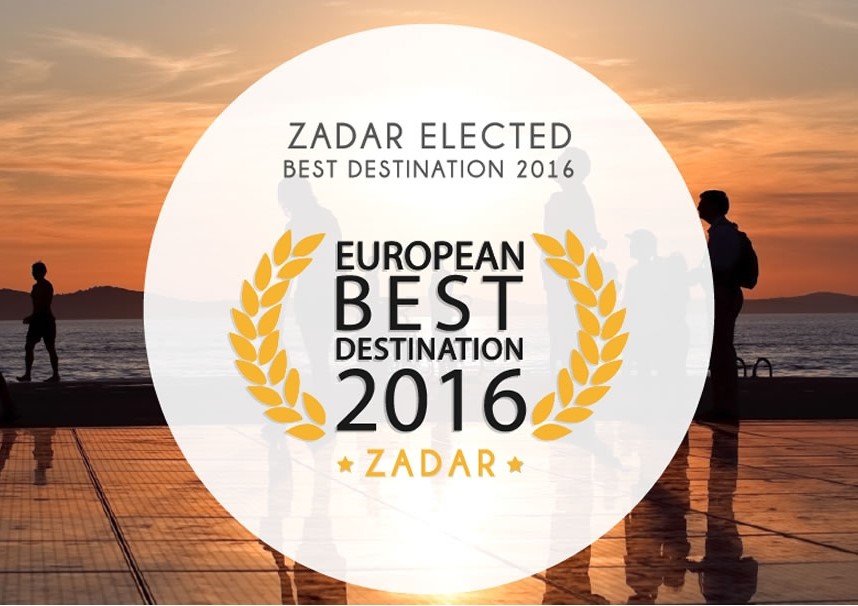 In 2016 Zadar won the prestigious title of Best European Destination.

St. Donatus Church is the symbol of Zadar. It was named after Bishop Donatus who had it built in the early Middle Ages. The architecture of the church is antic and most of its material comes from the previous Roman forum.

Forum was the main square in every city of the ancient Roman Empire, where the public life of the city unfolded. In Zadar the Forum is located in front of the Church of St. Donatus and Archbishop's Palace. Measuring 45 by 90 meters, it ranks among the biggest fora on the Adriatic coast.

People's Square dates back to the Renaissance times. It is the centre of public life in Zadar as well as the centre of municipal administration. City Guard, City Loggia and City Hall are located in this square. The oldest well preserved building at the square is the Church of St. Lawrence from the 11th century. The church can be visited from the back side of the Sveti Lovre café bar.

The square is the start of Kalelarga, the main street in Zadar.

Kalelarga (Calle Larga) is the main street in Zadar. Today it is known as Wide Street. In ancient documents, Kalelarga is also referred to as Via Magna, Strada Grande, and Ruga Magistra. It was built at the time of the Roman Empire. Kalelarga spreads from the Forum in the east to the People's Square in the west.

During the 16th century, the Venetians helped the city to withstand Turkish incursions by providing enough drinking water for its citizens. To this end, they built a large water cistern with five wellheads. Today this place is known as Five Wells Square.

Rector's Palace is a cultural monument dating back to the 13th century. It occupies an area of 2000 square meters. Parts of a Late Antiquity building were discovered during archaeological explorations. In 2016, the palace was reconstructed and is now the venue of many cultural events (museum expositions, live concerts, temporary art exhibitions, multimedia events, etc.)

St Anastasia's Cathedral is the biggest cathedral in Dalmatia. The construction of the cathedral started in the 4th or 5th centuries. The cathedral was damaged during the crusaders siege but was subsequently reconstructed and even extended.

The Sea Organ is situated at the west part of the Zadar's seafront promenade. The Organ is made in form of several steps that descend into the sea. The steps extend for about 70 meters along the coast. Thirty-five pipes of different length and diameter are situated under the steps. The pipes are built vertically in relation to the seafront. The air suppressed by the waves and strikes in the tube produce a number of musical variations. Travellers Trip Advisor has included the Sea Organ in the list of top ten Croatian landmarks.

Greeting to the Sun

The Greeting to the Sun is located at the west coast of Zadar peninsula, near the Sea Organ. It consists of three hundred multi-layered glass plates placed level to the stone-paved waterfront. The glass plates are positioned to form a circle measuring 22 metres in diameter. The installation represents the Sun and planets of the solar system.

The dimensions of the planets and the Sun are proportional. Photovoltaic solar modules, installed under the glass panels, absorb solar energy during the daylight and turn it into electrical energy.

It is an archaeological museum offering a unique collection of over 5000 different glassware objects from the antiquity (from the first century B.C. to the fifth century A.D.)

A workshop where one can make an antique glass replica is open throughout the year. A glass jewellery workshop is also organised.

This city park dates back to the times when Zadar was a castle-fortress, the times when people could not leave the city after the sunset. Thus the Queen Jelena Madije Park constituted a sort of a ''city balcony''. This park provides a stunning view of the sea and the surrounding areas.

What gondoliers mean to Venice, barkajoli mean to Zadar. Known as Zadar's water taxi operators, they have been connecting two ends of the Zadar harbour for more than eight centuries now. This is a job that has been passed down from "knee to knee".

On the last day of creation God wanted to crown his work and he created Kornati of tears, stars and breath George Bernard Shaw 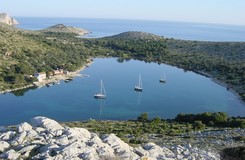 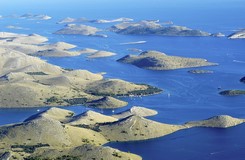 The Kornati maritime zone was declared a national park in 1980. The park measures approximately 220 square kilometres in area and consists of 89 islands, islets, and cliffs. The land accounts for only one-fourth of the park area. 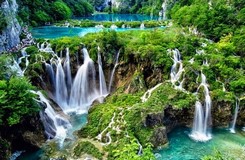 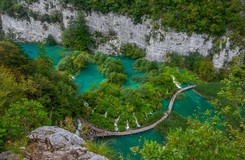 Plitvice Lakes are the most popular Croatian national park. The Plitvice complex consists of 16 lakes that can be seen from the ground surface. The lakes are arranged in cascades. This National park is a UNESCO World Heritage Site. 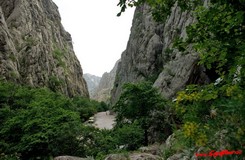 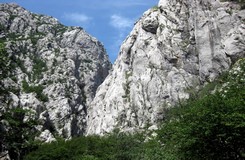 The Paklenica National Park is the second national park that has been declared in Croatia. It is situated at the south side of Velebit, the largest mountain massif in Croatia. The most impressive parts of Paklenica are the canyons of Velika and Mala Paklenica, which penetrate deep into the Velebit mountain range. The highest peaks are Vaganski vrh (1757 m) and Sveto brdo (1753 m). 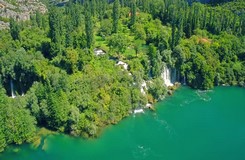 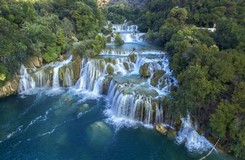 The Krka National Park was named after the Krka River, which is a part of the park. The park is famous for its large number of lakes and waterfalls. It covers the area along the Krka River, at the foot of the Dinara Mountain. The Krka runs through a 75 km long canyon and empties into the sea at the Šibenik Bay. A hydropower plant was built near the Skradinski buk waterfall at the Krka River. This is the world's second hydropower plant and the first one in Europe. 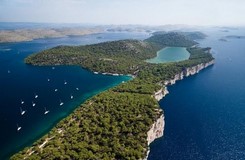 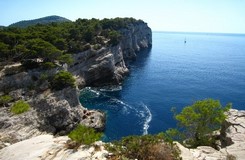 The Telaščica Bay is situated in the southeast part of the Dugi otok island. It is surrounded by 13 islands and islets and contains 6 islets within the Bay of Telašćica itself. Its special features include twenty-five small beaches and rocks that rise up to 161 meters above sea level and drop down to 90 meters below the sea. A big attraction is also a salt lake called Mir, familiar for its curative powers.

Vrana Lake is the biggest natural lake in Croatia. It was declared a Nature Park at 1999. Over 250 different bird species have so far been registered in this zone, and more than one hundred bird species nest at Vrana Lake.

The centre of the old town of Nin is an island 500 meters in diameter. The centre is connected with the mainland via two stone bridges. The city is bordered by walls, long sandy beaches, and a lagoon.

The biggest attraction in the city of Nin are the Baptistery of Prince Višeslav and the Church of St. Cross - the smallest cathedral in the world.

Biograd na Moru is a Croatian royal city. The name of Biograd was mentioned for the first time as early as in the tenth century.

In the eleventh century Biograd was the residence of Croatian bishops and kings. The first Croatian-Hungarian king was crowned here in 1102.